Tigers_Wests said:
There is a Q and A on Talking Wests Tigers instagram from today with Pole.

Ofahengaue is mentioned twice as being someone he looks up to at the club. Good to see Joffa taking on a leader type role and helping these young guys.
Click to expand...

Mighty_Tiger said:
Joe has won me over in a big way this year and keeping him for another 3yrs is great business by us. He is our forward leader and great to see this from the kids
Click to expand...

He has another new fan here. Even when we were getting belted every week and there were guys out there barely trying, he never shirked it or took easy options.
M

Luke Brooks #1 Fan said:
He has another new fan here. Even when we were getting belted every week and there were guys out there barely trying, he never shirked it or took easy options.
Click to expand...

The same, that’s what won me over also.
He really had a massive dig this year and was a clear standout performer for us. 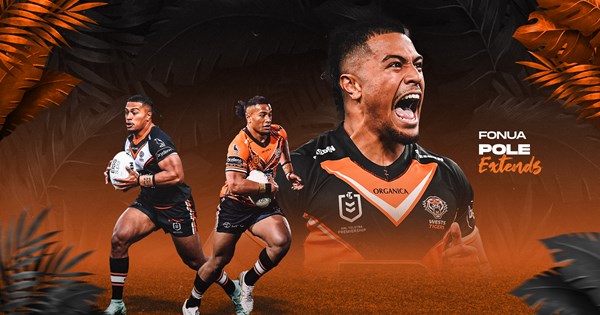 Wests Tigers is pleased to announce that Fonua Pole has extended his playing contract through until the end of 2025.

Wests Tigers is pleased to announce that Fonua Pole has extended his playing contract through until the end of 2025.

The 20-year-old forward signed a two-year deal in February this year for the 2023 and 2024 seasons and has today added a further 12 months to his stay.

Pole joined Wests Tigers in 2021 and rapidly progressed through the club’s representative teams before making his NRL debut last season.

The New Zealand born prop made ten consecutive appearances including his Round 16 debut against the Warriors and was subsequently named Rookie of the Year.

Wests Tigers CEO Justin Pascoe is pleased to have Pole locked in for the next three seasons.

“Fonua has worked hard to get to where he is, and I’m delighted for him,” said Pascoe.

“He has progressed from our Balmain SG Ball team to Jersey Flegg, then NSW Cup and on to the NRL, so it’s a credit to Fonua and also shows that our pathways programs are working.”

“Fonua did well in his first season in the top grade and I look forward to watching his continued development,” said Sheens.

"He’s a good example of what can happen for young players in our system who are prepared to work hard." - Tim Sheens

“I was stoked to play first grade last season, it was like a dream come true,” said Pole.

"I learned so much in a short time last season and I just want to focus on getting better and better over the next few years." - Fonua Pole

“It’s a really young squad and I think we’ve got some exciting times ahead of us, starting now.”

I really like this kid. He does the little things right. A nice quick play the ball, he runs good lines in the middle plus he is agile on his feet for a big guy.

He isn't going to be a rampaging prop like Stef but he'd be one of the first middle forwards I'd pick each week.

Going off current reports I'd say... if it all plays out the incoming news of losing Hastings.
T

Demps said:
Going off current reports I'd say... if it all plays out the incoming news of losing Hastings.
Click to expand...

Thanks.
It's like a merry-go-round - and we still do not know what the coach has up his sleeve for other incoming players.
M

Hope he has an injury free run, continues to run hard & evolves his game with some late movement at the line mixed with an offload - he could be anything.

Good job signing Pole up to the end of 2025. All the skills of a modern NRL forward and something different to the mould of forwards we have had over the last few years.
4

Solid signing , he will grow into a gun later
losing Hastings if to get Klemmer I’m ok
Brooks will need to pull a finger out although Appi will Steer , Brooks heads up footy , AD next to him at 5/8
R

Demps said:
Going off current reports I'd say... if it all plays out the incoming news of losing Hastings.
Click to expand... 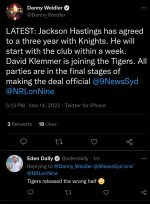 Round 2 at Leichhardt, bring it on.

One of the few bright spots of the season. Good news.

There is nothing more embarrassing than not being able to get your Pole to extend.
H

Great news ... This young guy took his opportunity and ran with it.
Well done and just shows the other young guys if you work hard it can happen.

There is nothing more embarrassing than not being able to get your Pole to extend.
Click to expand...