Where's the vino?
This topic has been deleted. Only users with topic management privileges can see it.

<big>Balmain Residents ‘Disgusted’ By Lack Of Pinot Grigio At Leichhardt Oval</big>
"AFL is a Melbourne game, and the inner-west is more like Melbourne than anything else - it’s often compared to Europe, so soccer could be a better fit," 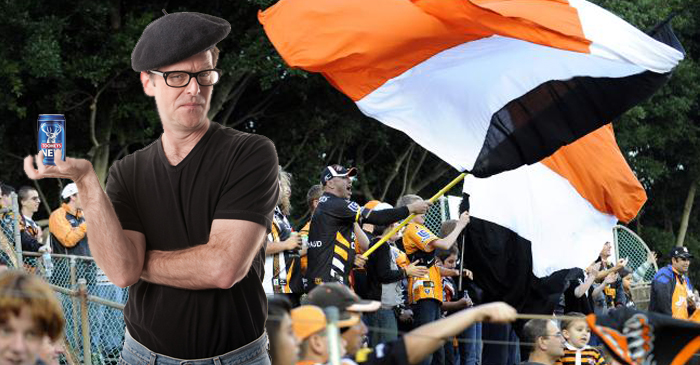 Despite living in Balmain for over five years, the 48-year-old graphic designer had never been to a live NRL match at nearby Leichhardt oval. That was until yesterday afternoon.

“A lot of the bars and restaurants in the community often hang orange banners around this time of the year. It’s kind of a cute way of paying homage to the working class families that don’t live here any more,”

“I thought I may as well go and watch the match because they don’t happen very often,”

“In fact, I have previously signed petitions for a ban on rugby league in Balmain. But apparently the Wests Tigers supporters hold this area quite close to their hearts,”

As a founding member of the New South Wales Rugby League and one of the most successful in the history of the premiership, with eleven titles, they once epitomised the game’s working class roots.

However, in recent years, the area has been overtaken by ‘corporate creative’ residents who resent the concept of contact sport.

Nigel Waspey says his wife and several other neighbours were shocked and appalled at not only the behaviour of the rugby league fans present during Wests 36-22 win over the Manly Sea Eagles yesterday, but also the drinks on offer at the canteen.

“Never in my life would I have imagined that I would be forced to drink out of an aluminium can in the inner-west,”

“Not only was their no pinot on the menu, there was not one wine at all. Red or white,”

“I was forced to drink a mass-produced beer in front of my own children. It’s been very tough for them,”

While Mr Waspey says he can see the merit in the camaraderie that community football team can create, he says maybe rugby league isn’t the right sport for contemporary Balmain.

“I can understand the need to recognise this area’s working class roots. I mean, that’s half the reason we moved here from Potts Point. When the factories were closing down, we were able to move in to the old workers cottages,”

“But, to tell you the truth. That era is dead and gone for Balmain. People like me are more representative of what this area looks like nowadays, not this NRL team. There are definitely no Polynesians living here,”

While Nigel and his family claim to be “real sports nuts” – he says it’s time for Sydney to just acknowledge that the inner-west is more of a soccer or Australian rules hub nowadays.

“AFL is a Melbourne game, and the inner-west is more like Melbourne than anything else – it’s often compared to Europe, so soccer could be a better fit,”

“It really is time for those kinds of people to take their bogan football back out to the areas that still have blue collar workers. Balmain is a different place and it doesn’t belong to them any more,”

“All they needed to do was have a decent wine list and they might’ve been able to win the us locals onside. But they are more concerned about their low-brow canned beer. It’s just so crass.”

You do know this is a joke, right? Just checking.

The old Beetoota Advocate - at it again.

You do know this is a joke, right? Just checking.

Classic… Nothing wrong with a good Pinot.

The reason we 'Blue collar workers" even though mine were white moved out of Balmain was to get away from “Would be, if they could be” wankers.

The inner west is nothing like Melbourne - thank God!

I suggest this tool stay home in his little miners cottage that he rents for thousands, drinks his cask wine and give us all a break. Don’t forget to shield his children from the big bad ogre Rugby League players whilst playing Tiddly Winks with them.

Heavens above - the things you come across without a stick.

Mate! That may well be but…

80% of the people who live there now are like that - mores the pity.

The answer I wrote was for the 80% Balmain / Rozelle ( pretend their address is Balmain) wankers.

The guy sounds like he is elitist as well as a racist. I don’t know what entitles him to be so class superior but my guess is that this guy is a tool who is continually lives in a world of delusion.

Mate! That may well be but…

80% of the people who live there now are like that - mores the pity.

The answer I wrote was for the 80% Balmain / Rozelle ( pretend their address is Balmain) wankers.

It was a set up …. satire. Look at the photo he wasnt even there - photo shopped.

Waspey, White Anglo Saxon Protestant Elitist Yuppie!, yep the article had me going for a while until I read the source, very funny, so funny in fact it could be real.