NRL Off Season 2020/21 Scandals
This topic has been deleted. Only users with topic management privileges can see it.

The past few years have been particularly bad for off season scandals. We have had a number of serious sexual assaults, domestic violence, driving under the influence of alcohol, stabbings, someone got tasered, and more. This thread is for any off season scandals until the next season starts.

Here’s hoping this thread doesn’t get used very often. Last off season we couldn’t go a week without somebody being arrested.

Iv was recording it ??

Zero Bali trips this offseason should improve the odds dramatically… But conversely having no access to Thai rehab clinics might pull those odds back a tad.

Something is brewing that’s for sure…

Cleary sticks his chin into some smelly business this season

Does the Illinois still have strippers? Asking for a gnome.

Tristan Sailor should make the list, his season was over

First scandal of the off season baby. We are on.

Sex, drugs and a cover-up: NRL sits on explosive complaint

The National Rugby League’s integrity unit has been accused of turning a blind eye to an extraordinary complaint lodged more than a year ago involving a star player’s toilet tryst, an aggrieved husband who was given prescription medication by a club official and the club’s doctor who then provided a false medical certificate.

In a lengthy complaint to the NRL’s integrity unit, which has been obtained by the Herald, one of the North Queensland Cowboys’ star players is alleged to have “committed a sexual act with another person (not his wife) in a public toilet in one of Australia’s busiest airports.” 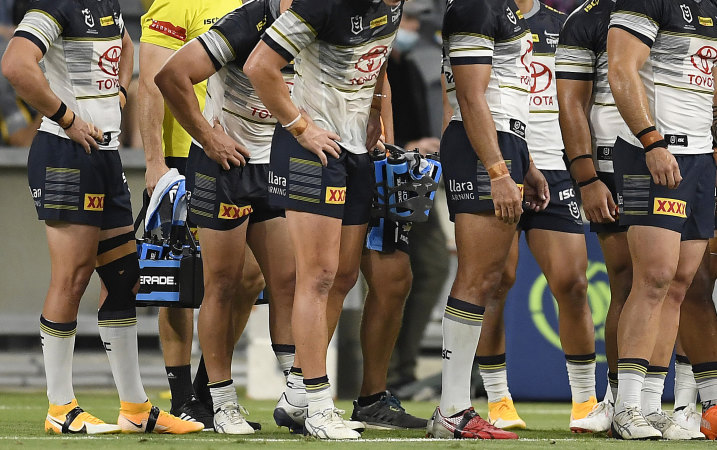 A North Queensland Cowboys player who was involved in a toilet tryst with a woman is the subject of an NRL integrity unit complaint.

The team had played an away game in mid-2018 and the players were returning to Townsville via Brisbane airport.

The husband of the woman allegedly involved in the incident has made the complaint to the integrity unit via his Brisbane lawyer John Sneddon.

The man was distraught and furious when he discovered a message from the star player to his wife about their toilet tryst in the Qantas lounge which occurred on Father’s Day 2018.

Alarmed at what could become a public relations nightmare, the woman, who is employed by the Cowboys, contacted the club’s then football manager Peter Parr for help.

“On becoming aware of our client’s knowledge of the sexual act,” Mr Parr gave the husband prescription medication “to help him cope with the shock,” said Mr Sneddon in his complaint to the NRL, first lodged in October last year.

Unbeknown to the husband, the tablets Mr Parr gave him were Valium.

Mr Parr, who is currently the manager for the NSW State of Origin team, admitted to the Herald that he gave the husband the tablets. Mr Parr said that on the night of September 5 the husband was at Mr Parr’s home in a very distressed state.

Mr Parr denied that the tablets were his or that he knew they were Valium. He claimed he had “swung by the doc’s” place on the night to get something to help the husband sleep. “They weren’t mine. I don’t have Valium in the house. Panadol and cough medicine is all I have,” he said.

The husband, a long-haul truck driver, subsequently tested positive for benzodiazepine as part of a routine workplace drug test.

Dr Chris Ball, who runs a sports clinic and is the team doctor for both the Cowboys and the national team, came forward to claim – falsely – that he had personally consulted with the husband on the night of September 5, 2018.

“[The husband] had experienced a family crisis and was stressed and unable to sleep,” said Dr Ball in a medical certificate to be provided to the husband’s employer.

To explain the lack of any written prescription for the medication, Dr Ball stated in the medical certificate that he “does not prescribe benzodiazepine medication” and that on this occasion “I gave [the husband] a sample quantity of four diazepam [Valium]…tablets to help facilitate sleep.”

On September 25, Dr Ball was contacted by a medical officer on behalf of the truck driver’s employer. That doctor noted the “recent prescription for benzodiazepines on the background of acute crisis and poor sleep” and requested further information as to the “medical fitness” of the husband to continue his job as a truck driver.

On his Sports Clinic NQ letterhead, Dr Ball replied the same day, “I have not prescribed any more medication. He is sleeping well and is not needing ongoing treatment or medication.”

Guidelines issued by the Australian Medical Association, stipulate that “Doctors who deliberately issue a false, misleading or inaccurate certificate could face disciplinary action under the Health Practitioner Regulation National Law.”

Mr Sneddon, whose client has never met Dr Ball, disputed Mr Parr’s claim that the football manager left his home late at night to go to Dr Ball’s premises to obtain medication for the husband.

Mr Sneddon has provided the medical certificates to the NRL and has informed the NRL’s integrity unit that Dr Ball is the subject of an investigation by the medical watchdog AHPRA (Australian Health Practitioner Regulation Agency).

AHPRA and the OHO said that due to “confidentiality provisions” they were unable to comment to the Herald on individual matters.

However, Mr Parr confirmed to the Herald that Dr Ball has been the subject of an inquiry by medical authorities and that he had provided the regulator with an account of what had occurred on the night. Dr Ball did not reply to the Herald’s emails and calls requesting comment.

In hindsight, said Mr Parr of his provision of Valium to the husband, “I wouldn’t do it again” but at the time he was dealing with “a very stressful situation.”

The couple’s relationship never recovered and at one stage the wife called police, expressing concerns for her and the player’s safety, following her husband’s discovery of the affair. No charges were laid.

Mr Parr, who was recently appointed to the Cowboys’ board after stepping down as the team’s manager, acknowledged that both he and Dr Ball should have informed the integrity unit about the investigation by Queensland medical authorities.

Registered NRL personnel have an obligation to report matters which may bring the game into disrepute. Given that engaging in a sex act in a public toilet is a potential criminal offence constituting an act of public indecency, Mr Parr also agreed he should have notified the integrity unit of the alleged inappropriate behaviour of the star player.

In his most recent letter to the integrity unit, dated 31 August, Mr Sneddon once again complained about the lack of action by the NRL, saying there was one rule for some players, and another rule for others.

He also noted that, since lodging the complaint more than a year ago, the NRL Integrity unit was able to investigate and impose penalties on players including Josh Addo-Carr, Latrell Mitchell and Nathan Cleary.

On October 9, the NRL informed Mr Sneddon that the matter would be “progressed” to an investigation. This came only days after explosive allegations about former Souths’ star Sam Burgess were published in The Australian. The allegations, denied by Burgess, included that in November 2018 Burgess, while on a drug-fuelled bender, was injected with a liquid tranquilliser by Souths’ club doctor Andrew McDonald who wrote out the prescription in another person’s name.

However, the NRL unit has claimed that a lack of co-operation on behalf of the complainant in the Cowboys’ matter has been the reason for the lengthy delay. “Where complaints are made to police or other regulatory bodies we are mindful not to prejudice or cut-across those processes with our own investigations,” said a spokesman for the NRL.

“The NRL will progress its investigation and is unable to provide further comment,” the spokesman said.

Neither the woman nor the player responded to requests for comment. The truck driver referred queries to his lawyer, Mr Sneddon, who said his client has been widely disparaged by the Cowboys in an attempt to discredit him. He said his client has lost everything.

In late 2018, the husband sent the following text message to the player’s wife.

"[Name removed], I know you wouldn’t like me texting you but I feel no one but you could understand how I am feeling. I only found out today [his wife] gets to keep her job at the Cowboys.

"I feel so gutted that nothing what her and [the player] have done after cheating on both of us over that Gold Coast weekend is fair. I have lost everything - my wife, family. I feel so worthless after what they have done but to know that they will still see each other at the club is so hurtful for me.

"I just can’t believe Parrie [Peter Parr] is covering [the truck driver’s wife’s] tracks and will still let her travel with the team. I feel like no one gives a f…k about how we might feel about it.

"I guess I should just realise I am nobody and not important to anybody especially to [his wife], the Cowboys and obviously [the player] who felt my wife was also his property. I won’t bother you ever again. I promise not to ring or text again. I am sorry. "

He received no reply.

If the allegation in the article concerning the victim being disparaged is true, this is a very significant matter.