Really? How could you possibly be so sure?
Surprised the people vehemently criticising fellow forumers who believe in God haven’t jumped onto this, but I guess it’s alright to believe that aliens exist.

We are one planet, orbiting one star, which is one of about 250,000,000,000 stars in our galaxy alone. It would be totally remarkable that there is no life in any other of those solar systems.

However, there are extraordinary disances between us and all those other solar systems. Even the closest stars are about 4 light years away (40,000,000,000,000 km). If we could travel at the speed of light, it would take 4 years just to get to the nearest star. With current technology it would take many decades to reach. Assuming space travelling aliens would have better technology, it would still take unreasonable times to travel, unless they are able to travel faster than the speed of light.

This is what you get when you have the same teams playing finals football every year. What happened with Parra and the Raiders? What would happen if we ever make it?

@Tigerboy I have no doubt that aliens exist, ie life on other planets. However, it is highly doubtful that they have ever come to Earth.

Love the choice of music in that video…

Those obstruction calls against us made me so mad. Can’t remember the details exactly, but I think it was Gallen who had every chance to tackle Nofa, then waited for him to be slightly behind another player before trying. It was clear milking and the refs were only too happy to oblige.

Then Brooks had a Sharks player standing straight in front of him in the line for their first try, but for some reason they said he made the choice. What other choice did he have???

I’d love to sit down with an NRL ref and have them explain how obstruction calls are decided. I just can’t figure it out…

@rah53 said in Reynolds full of positivity ahead of milestone match:

I believe we are better off with team we’ve played the last 2 weeks. Although we played 2 teams that have issues themselves, I believe this team has a different energy about them. And I reckon that comes from Josh Reynolds inclusion. And there’s that old saying, “If it ain’t broke, don’t fix it”

And If he is broke, don’t play him!

@coolcat said in The J(uro) Curve:

@Juro hi there and thanks for your work all year.

Just asking about broncos. They can miss out if they lose and we tie with the sharks. Does that have much of an effect?

Therefore, including the draw would actually worsen our chance of making it. It would fall from 50% to 49.9992%.

Of course, this is based on the overall assumption that each game is independent of each other game. As I said, my model is based on simplified assumptions…

@OzLuke said in Sharks lose tomorrow and destiny is in our hands:

@happy_tiger said in Sharks lose tomorrow and destiny is in our hands:

@Tigerboy said in Sharks lose tomorrow and destiny is in our hands:

@TheDaBoss said in Sharks lose tomorrow and destiny is in our hands:

@Geo said in Sharks lose tomorrow and destiny is in our hands:

@TIGER said in Sharks lose tomorrow and destiny is in our hands:

What odds would you take for the Tigers to make the 8?

Enough to put your house on…?

Im gonna roll with my motorised scooter , for now

We make the finals , I want 8th

it would be manly at fortress toilet wouldn’t it?

We won there last year…

@Harvey said in The J(uro) Curve:

Something wrong with the stats. Melbourne can’t be 100% for the minor premiership and roosters 5%.

Oops… Forgot to change it to 0% for the Roosters…

Not a lot to report this week. It should be no surprise that we are 50% chance of making the top 8. If we win, we are in. If not, we are shot. 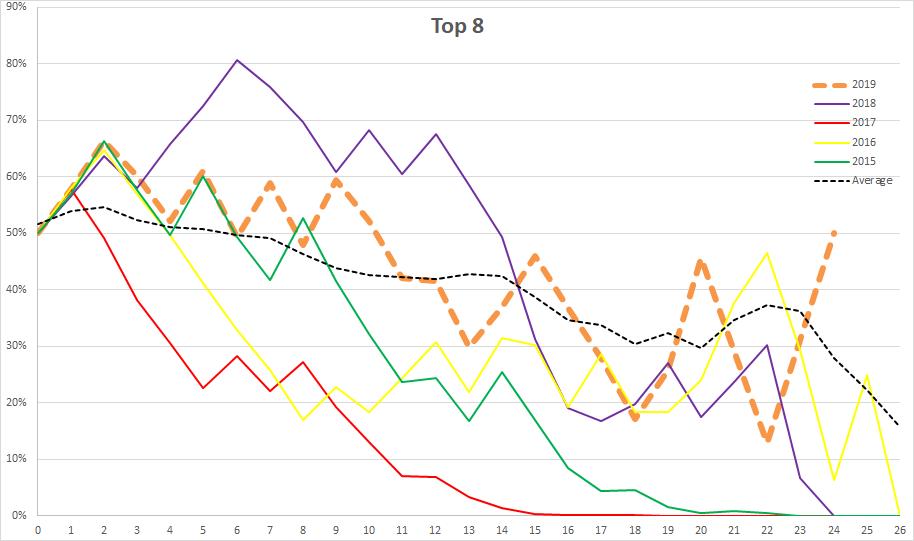 Fate is in our hands (…and the Sharks, … and the referees). I am going to be a nervous wreck until Sunday night. Can the curve turn up???