Leichhardt Oval to receive an upgrade?

hobbo1 said:
When was this ?
There was talks about taking it to NZ .
Click to expand...

This is the courier mail article below.

Suncorp Stadium has retained Magic Round with Queensland staving off a poaching bid from the NSW government to keep the $20 million NRL spectacular in the Sunshine State.

News Corp can reveal the Queensland government, in concert with the NRL, could announce as early as Thursday that rugby league’s Magic Round showpiece will stay at Suncorp Stadium for another 12 months in 2023.

It is understood the parties are also in talks for the Queensland government to retain one of the marquee events on the NRL calendar as part of a contract extension for 2024.

The one certainty is Magic Round will not be lost to Queensland next year as 272 first-grade players from the 16 NRL teams prepare to descend on Suncorp from Friday for the third instalment of the three-day event.

ARL Commission boss Peter V’landys declined to discuss contract talks but lauded the success of Magic Round in Brisbane and the support of Queensland premier Annastacia Palaszczuk.

“We’ve been thrilled with the success of Magic Round in Brisbane,” he said.

“The partnership between the Queensland government and the NRL has been spectacularly successful. We have every incentive to keep Magic Round at Suncorp Stadium because of that relationship.

“We will never forget what the premier and the Queensland government did for us during Covid to keep the NRL alive and anyone who knows us knows we reward loyalty in spades.

“Magic Round has been such a success at Suncorp. The crowds have been magnificent, we’ve got sellouts this week and that demonstrates the support of Queensland rugby league fans, so we owe a debt of gratitude to them as well.”

Since the launch of Magic Round in 2019, a whopping 264,969 fans have flocked to Suncorp Stadium to back a concept worth an estimated $20 million to the Queensland economy.

Mindful of the economic impact, the NSW government has launched a brazen bid to steal Magic Round as they prepare to unveil the state-of-the-art, reconstructed $900 million Allianz Stadium at Moore Park.

But with NSW set to host the NRL grand final for the next two decades, their Queensland counterparts will fight tooth-and-nail to keep the eight-game Magic Round bonanza north of the border.

QRL chairman Bruce Hatcher backed any bid to keep the concept in Brisbane, pointing out that Queensland fans have been passionate supporters of Magic Round.

“The rugby league capital looks like it is shifting north,” Hatcher quipped.

“I would say it should (stay in Brisbane) because it was a Queensland initiative. It’s been well supported by the state government.

“They deserved the first right of refusal. I am not a fan of what they still call the NSW rugby league grand final being in Sydney all the time but I have had my say on that.

“It just defies logic. It (Magic Round) has been great for the game. It does get supported and it really does a lot for the image of the game.

“I personally saw every game last year. It is the only time if you are a real fanatic that you get an opportunity to compare the top sides with the bottom sides.”

“We’re passionate rugby league people but we don’t get the opportunity of having nine teams in Sydney,” Hatcher said.

“You get your appetite sated by going and watching the games you want to.

“We don’t get that opportunity in Queensland.”
J

Jedi_Tiger said:
interesting with the LO redevelopment it is apparently contingent on playing a guaranteed 6 games a year at LO
Click to expand...

hank37w said:
Especially when they realize that they are ankle deep in urine and faeces.
Click to expand...

How come the Council hasn't closed it down as a health hazard?, serious question

I'd like to see the old girl get more than a coat of paint and some demountable dunnies, but I reckon there's better places that money could be spent at the moment.
B

If they re-build the grandstand they have to wrap it around the northern end too. So much wasted space at the end. Brookie looks much better now that there's 2 stands and a hill
J

69-05-41 said:
It is a bit harsh on the Donkeys having to play an "away" game at Suncorp every year since its inception while we have always been the "home" team. Move along no NRL rorting here.
Click to expand...

Jedi_Tiger said:
the trees behind the goal will be the problem though
They need a steep gradient like bankwest really cram them in high and push it right up to the fence line
keep the hill and heritage stands unchanged you have a great inner city suburban ground
Click to expand... 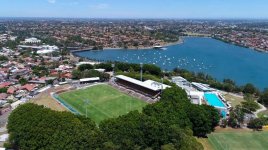 Stevec said:
I wish pascoe would realise that home ground advantage is REAL
eg brookvale oval last week .Not to worry next game is a home game against a QLD team in QLD !!!
Click to expand...

What did we expect from a Panthers reject who hired a Roosters reject.
B

Luke Brooks #1 Fan said:
I didn't realise we had been the home team on 3/3 occasions. We've probably done it for the $$. Clubs likely get paid to move a home game. Pascoe is known for doing almost anything to make or save a dollar here and there.
Click to expand...

Bingo. As long as he gets his bonus.

This has been put on hold..Darcy is busy chopping down trees to build a skate park..

Jedi_Tiger said:
the trees behind the goal will be the problem though
They need a steep gradient like bankwest really cram them in high and push it right up to the fence line
keep the hill and heritage stands unchanged you have a great inner city suburban ground
Click to expand...

Yeah it drops away very suddenly and steeply too.... I'm sure with today's engineering it'd be safe but it'd be a bit concerning for me.... Like building a grandstand on a cliffs edge

Jedi_Tiger said:
interesting with the LO redevelopment it is apparently contingent on playing a guaranteed 6 games a year at LO
Click to expand...

How hidden is that pool
B

Geo said:
This has been put on hold..Darcy is busy chopping down trees to build a skate park..
Click to expand...